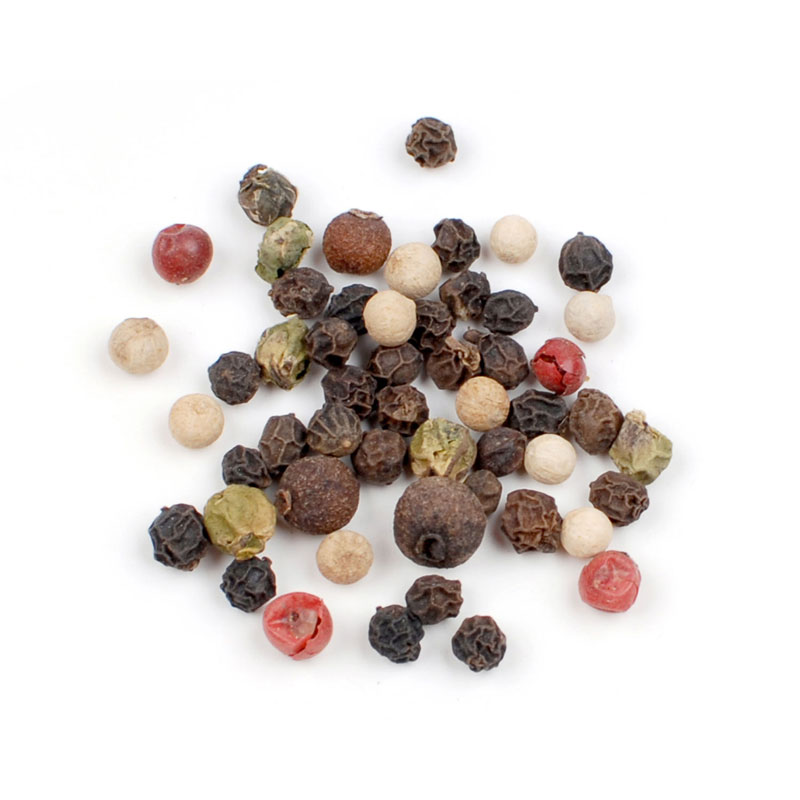 Our Five-Peppercorn Blend is a colorful and multi-layered mixture of black, white, green and pink peppercorns, combined with a small amount of Jamaican allspice, adding sweet undertones.

Black, white and green peppercorns all come from the common pepper plant (Piper nigrum), a flowering tropical plant that was originally native to India. The plant produces tiny berries or "drupes." These berries can be harvested and processed at various stages of their maturity to achieve different flavors and colors.

Peppercorns have far-reaching cultural and historical significance. They were sought-after by Europeans as far back as ancient times, and as a result, often drove exploration and commerce. As early as the Roman Empire, they were bought, sold and taxed. The lure of pepper and other spices brought explorers from all over Europe to India during the Middle Ages and the Renaissance. Peppercorns were sometimes accepted in lieu of money in dowries, taxes and rent.

Vietnam is currently the world's largest producer of peppercorns, although India was the site of the first documented peppercorn use in the 4th century B.C. Experts believe the plant originated in the Southern Indian state of Kerala.

A stimulant, peppercorns have traditionally been used as a remedy for digestive complaints including indigestion and constipation. The chemical that gives peppercorns their hot flavor, piperine, may assist in chemical functions within the body. In Indian Ayurvedic medicine, peppercorns are also used to stimulate appetite and to treat colds, coughs and sore throats.

Jamaican allspice is not only used for its culinary depth and versatility, but for treatment of digestive ailments, and is known to improve appetite through its active amount of phenol eugenol, a gentle numbing compound that was historically used by dentists. Its warming effects are also often used externally to relieve chest infections, arthritis and flu symptoms.

Classic spaghetti carbonara would not be complete without a healthy dose of fresh cracked black pepper. Start with our Five Peppercorn Blend, hand-cracked into pieces that will pop with every bite, balancing the richness of egg yolk and Parmesan cheese. 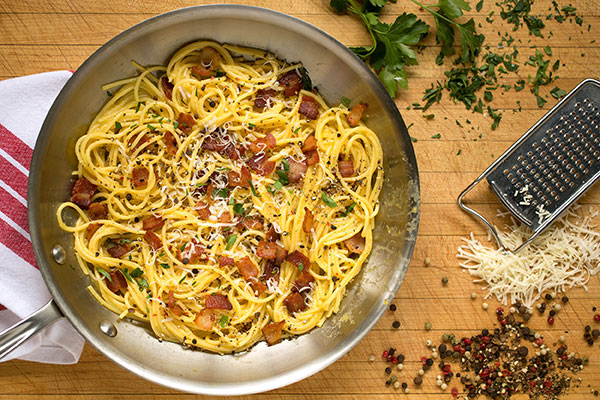