Chana Dal Peas, also known as "Bengal gram," are pulses derived from the desi chickpea, a small, dark legume that is hulled and split, giving an appearance and taste that is subtly reminiscent of corn.

Carefully sort and rinse Chana Dal Peas thoroughly. Add 1 cup to 4 cups of water. Bring to a boil, then reduce heat to a simmer. Cook for 35 minutes, skimming any foam from water.

Chana Dal Peas, also known as "Bengal gram," are pulses derived from the desi chickpea, a small, dark legume that is cultivated mostly in the Middle East. It is different from the typical chickpea or garbanzo bean in that it is hulled and split, younger, smaller and sweeter. Chana Dal can be part of a nutritious diet, providing an excellent source of protein and fiber while being low in fat, wheat and dairy-free and easy to digest. In addition to its high levels of protein and fiber, it is also a good source of iron and It has one of the lowest glycemic indices of any food, making it a particularly good choice for those with diabetes and blood sugar regulation issues.

Chana Dal Peas are fairly inexpensive and flavorful, making it a popular diet staple. This ancient ingredient is especially popular in India where it is used to make dal, a traditional dish of legumes cooked with rich spices. The crop dates back at least as far as 7500 BC and has even been found buried with Egyptian mummies. It is speculated that the Greeks brought it to India, where it quickly became an important food source.

In this traditional North Indian recipe, our Chana Dal Peas are simmered with spiced water until they break down, then combined with a hot flavored ghee or oil mixture known as "tadka", to provide a final layer of flavor and richness. 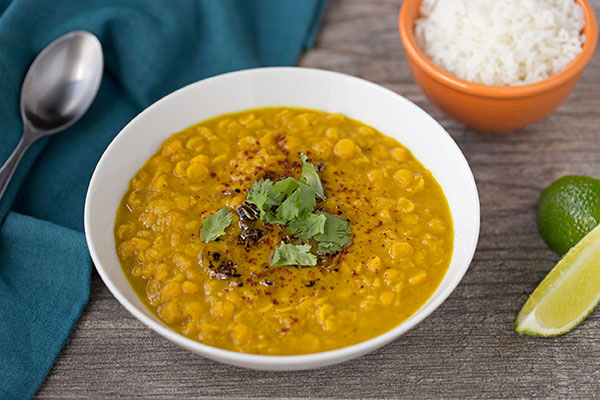